Cheyenne is a bay 16hh graded & registered Hanoverian mare. She bred a foal as a youngster who is now a showjumper at Foxhunter level.

Cheyenne was a grade C showjumper (under the name of Mayfields Live the Life ) when her promising career was cut short by a road accident. She was 3rd in the Trailblazer Final 2003.

Cheyenne has a lovely laid back temperament and has settled into her new life as a broodmare with ease.

Landadel (Sire) is known for producing dressage horses as well as showjumpers. He is the sire of 4 graded stallions, Lady Weigard (ridden by Marcus Beerbum) & Silva Little Gun ( Meridith Michaels-Beerbum).

Landgraf (Grand Sire) is a top sire of showjumpers and there is a statue of him at Elmslom Germany. There are nearly 60 licenced stallions by Landgraf & 260 broodmares in the Head Stud Book & 70 in the state Premium. One of the most notable offspring is the Olympic Show Jumper Waterford Crystal.

In 2007 she had a bay colt by Oyon called Jacinto. Jacinto is very athletic & friendly. He is now gelded, registered and microchipped. He is very laid back and easy to handle. Has turned into a wonderful tall horse who loves to jump.

In 2008 she had a bay filly by Oyon called Henrietta. Henrietta has a lovely, sweet nature combined with superb movement ( canter pirouettes at 3 days old! ).

In 2009 Dragon Diablo was born, he is a very smart bay gelding with 4 white socks. Diablo is a lovely laid back soul and has gone to a lovely lady not too far away.

In 2010 Lection was born, he is a near black colt and has the most amazing straight movement and friendly character.

In 2011 we had another filly, Tangelo Dragon – and our first chestnut from this pairing. She is a fabulous strong filly and really well put together. She’s gone to Devon to a lovely family hoping to do endurance with her.

In 2012 we had another filly, Petra ( another chestnut ). She has grown into a powerful strong filly.

In 2013 we had a bay filly, Vader, she is a stunner and has a kind temperament.

Cheyenne has been retired and is enjoying life in the field. 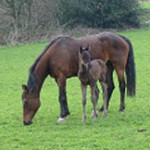